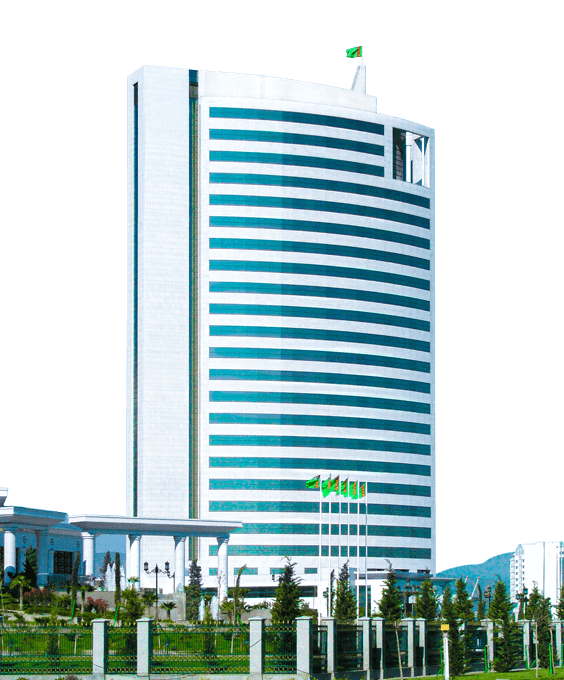 The State concern "Turkmengas", being one of the largest energy enterprises in the world, carries out exploration, pro­duction, preparation, transportation and processing of natural gas.

Turkmenistan ranks fourth in the world in terms of natural gas reserves. With enormous energy potential, our country is consistently building a multi-vector infrastructure for the ex­port of clean fuel to world markets. Projects implemented in this area play large role in ensuring regional and global energy security.

A good example of this is the Turkmenistan-Uzbekistan-Kazakhstan-China gas pipeline, in which the idea of rebuilding the Great Silk Road, linking the peoples of Eurasia for thou­sands of years, was embodied. The interstate pipeline includes three parallel lines (A, В and C), the length of each is 1830 km. Gas coming from Central Asia is supplied to the population of, 22 provinces and autonomous regions of the PRC, which is over 500 million people.

Since the launch of the pipeline in December 2009, over 260 billion cubic meters of natural gas has been exported to China from Turkmeni­stan. In accordance with interstate agree­ments, with the commissioning of line D, the supply of Turkmen gas to the PRC will increase to 65 billion cu­bic meters per year.

Another strategically important initiative is the construc­tion of the Turkmenistan-Afghanistan-Pakistan-India (TAPI) gas pipeline, with a total length of over 1840 kilometers and a throughput capacity of 33 billion cubic meters of gas per year.

As the President of Turkmenistan Gurbanguly Berdimuhamedov emphasizes, the new energy route through which long-term deliveries of natural gas to the largest countries of Southeast Asia will be provided, will give a powerful impetus to the economic development of the region, will contribute to solving social and humanitarian issues, strengthening peace and stability.

The significance of this project is confirmed by a special resolution adopted in March 2018 at the meeting of the UN Security Council. The construction of TAPI is supported by many states, as well as international finan­cial institutions.

Currently, the State concern “Turkmengas" supplies Turkmen natural gas from the Dovletabat-Deryalyk gas pipeline to the Rus­sian Federation. There are also technical opportunities for the supply of Turkmen gas from the Korpeje-Gurtguyy and Dovletabat-Hangeran gas pipelines in a southerly direction.

In 2015, the East-West gas pipeline was put into opera­tion, connecting all the country's gas pipelines into a sin­gle system. Thanks to this, it became possible to carry out reverse deliveries of gas from large natural gas fields “Dovletabat" “Yashlar" “Galkynysh" located in the east of Turkmenistan to the velayat province. In addition, the East-West gas pipeline can be used to export Turkmen energy to international markets through the Caspian Sea.

The Trans-Caspian gas pipeline project is not removed from the agenda either. After signing the Convention on the legal status of the Caspian Sea, work in this direction was intensified in order to develop a mechanism to ensure the supply of Turkmen “blue fuel" to European markets.

The industrial development of the world's largest gas field, the Galkynysh, is underway at an intensive pace, the reserves of which, together with the Yashlar and Garakel fields, are estimated at al­most 27 trillion cubic meters. Earlier, three gas processing com­plexes with a total capacity of 30 billion cubic meters of “blue fuel" were commissioned here. At the moment, the production fund of the field, which area is more than 4 thousand square kilometers, the flow rate of each well is on average equal to 2 million cubic meters of gas per day.

In addition, a contract was concluded with the Japanese com­pany Mitsubishi Corparation for the preliminary technical design of a plant for the production of 10 billion cubic meters of marketable gas per year, which is planned to be built as part of the next stage of development of Galkynysh.

Fruitful cooperation has been established with the China National Petroleum Corporation (CNPC), which, under the terms of the Production Sharing Agreement, develops fields in the Bagtyyarlyk contract area, that has become one of the sources of raw materials for the Central Asia-China transna­tional gas pipeline. Seismic surveys conducted on the right bank of the Amyderya River, drilling exploration and pro­duction wells made it possible to identify large gas deposits here.

Great prospects are associated with the development of deposits in the Turkmen sector of the Caspian Sea. Today, experts estimate its reserves at 12.1 billion tons of oil and condensate, as well as 6.1 trillion cubic meters of gas.

Today, the partner of the State concern “Turkmengas", “PETRONAS Carigali (Turkmenistan) Sdn Bhd" (Malaysia) actively works here and carries out the development of hydrocarbons in the contract area "Block-1". The total investment is about $11 billion. Currently, the Magtymguly and Diyarbekir fields are intensively producing oil, gas and condensate. Drilling is also underway in the western part of the Garagol Deniz field.

One of the largest energy companies
in the world